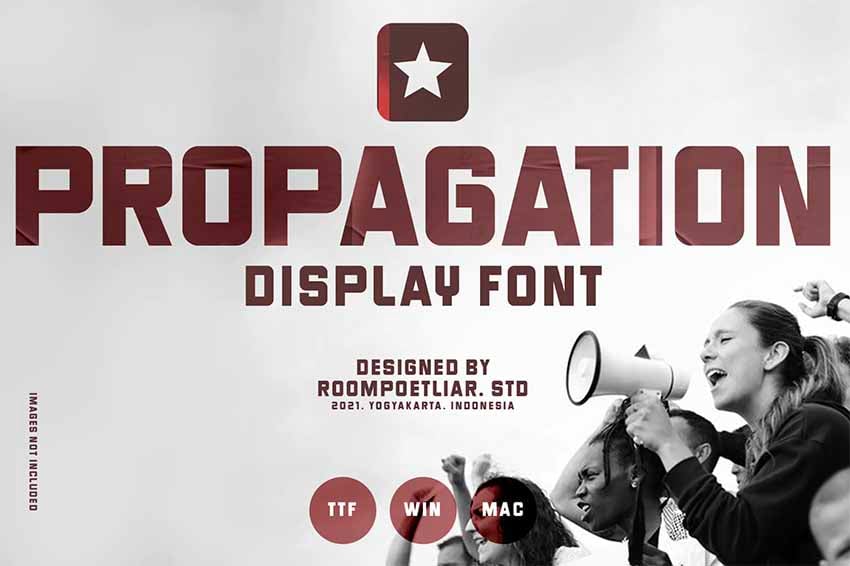 Check out this collection of the best constructivism fonts as well as poster effects and graphics available at Envato Elements.

What makes this service outstanding is that for one low monthly fee, you can download unlimited digital resources like constructivism fonts, poster effects, and graphics, as often as you like.

What Fonts Are Used in Russian Constructivism?

Constructivism is an early twentieth-century art movement which eschewed decorative styles and celebrated the more austere and abstract aesthetic as reflected in modern industrialisation. Constructivists supported the idea of art for social purposes and propaganda, and the style came to be associated with Soviet socialism and the Russian avant guard movement.

Fonts in constructivism are clean and bold. When applied to graphic design, they often appear in red and black and are often angled and combined with bold collaged elements. Let’s take a look at some wonderful examples of them now.

TF-Revolucion Communist Propaganda Font is a bold and blocky font which is a perfect example of a constructivism font. It’s a great typeface to use in banner and poster design.

Pillars Soviet Propaganda Font is a great font for a wide range of projects that require a display font. Pillars includes upper and lowercase characters, numbers, punctuation, and multilingual support.

Looking for a bold display font? How about Freich USSR Propaganda Font? Freich offers three styles: regular, inline, and fill. With 327 glyphs in all, it gives you a lot of options for designing unique text.

Sputnik Soviet Propaganda Font is, as you can imagine, a font inspired by the constructivism style in vintage USSR propaganda posters. The font offers four different styles and includes uppercase characters, alternates, numbers, and punctuation.

When you are looking for a bold font for important projects, Neubahn Russian Constructivism Font is an excellent option. This condensed type offers tight kerning and contains upper and lowercase characters, numbers, punctuation, and some ligatures.

Sometimes you need a bold font with a bit of pizazz. For those times, check out Katalist Old Russian Font. This boxy font includes characters with sharp end points, and it would be an excellent choice for posters, signage, or banners.

Check out Deutschlander Russian Constructivism Font, a wonderful font that’s designed to allow you to fit large characters into smaller spaces. The font includes upper and lowercase Latin, Cyrillic, and Greek characters, along with numbers, punctuation, and alternates.

When you’re looking for just the right font for posters and other large projects, check out TF-Russian Constructivism Font, a striking font with a boxy feel.

When you’re looking for a constructivism inspired font, you can’t go wrong with Soviet Propaganda Font. This display font is an excellent choice for your posters, banners, T-shirts, and more.

A fancy display serif, Czesko Communist Propaganda Font is one of the few serif fonts offered here, and for good reason: constructivism fonts are mostly sans serif. Czesko does offer some of the boxiness found in constructivism fonts, but with its inclusion of thin serifs, it introduces a sense of elegance.

When you’re looking for a clean, bold, eye-catching font, choose Queen of Camelot Constructivism Font. The all-caps display font features rounded corners with no variation in width, and there are three styles included for variety.

This bold display font is for all lovers of the constructivism style. Karbitan Russian Constructivism Font is a great choice for posters, signs, headlines, and other situations where you need a standout font.

How awesome is this font? Republica Minor Communist Propaganda Font is a bold display font that you need to have in your toolbox for those times when a project demands a clean, chunky font.

It’s always poster-making time when you use Hennigar USSR Propaganda Font in your projects. This bold display font is the very embodiment of constructivism and is the perfect choice for a wide range of projects.

Prodiga Soviet Propaganda Font is another eye-catching font that is irresistible. It includes uppercase characters, numbers, and punctuation.

Make a bold statement with Rapdoc Communist Font. Its designer drew inspiration from both constructivism and stencil styles. He ended up with a bold, modern typeface that’s an excellent choice for large-scale projects which need a standout display font.

Pay homage to constructivism design with the incredible Bloomsburg Old Russian Font. This retro font includes both Latin and Cyrillic characters. Incorporate it into your next project using your favourite design software.

Blockhead Russian Constructivism Font is inspired by constructivism. The font offers three weights, and each weight has 252 glyphs. It’s a great choice for industrial logo design.

Meet Jurka Communist Font, a wonderful and bold display font you can use for projects such as titles, posters, lettering, headlines, and book covers. Jurka offers two styles: regular and rough.

Whether you’re on the hunt for a propaganda or constructivism font, Leophard Russian Constructivism Font delivers—and it offers six different styles to create display text that delivers with a punch.

Eternal Constructivism Typeface is all the font you need when you are looking for a bold display font for your next project. Get it today and use it to create smashing posters, banners, signage, etc.

This block handwritten display font is exactly what you need when you’re looking for a font which will hold the attention of your viewers. Hekson Communist Font offers bold strokes that include uppercase characters, numbers, punctuation, and some ligatures.

Porcine Bosk Communist Propaganda Font is a bold sans serif that includes a wooden texture to create an eye-catching design. This wonderful block font should appeal to a wide range of users looking for standout fonts for their large-scale projects.

Mimicking the style of propaganda posters is easy when you use Scout USSR Propaganda Font. Its blocky, rigid shape is perfect for all sorts of design projects.

Try Brumder Constructivism Typeface if you want to create strong, eye-catching headlines or posters. Brumder would also be a great choice for creating a logo or emblems. Give it a try!

Take your work to the next level with Nordik Communist Font. Nordik includes uppercase letters, numerals, and a large range of punctuation.

How striking is Redig Russian Constructivism Font? This bold, condensed display typeface is all you need to help your projects stand apart from the rest.

Wargate Communist Propaganda Font brings a stencil style to constructivism. The font is offered in five weights that will allow you to use the font for both display and body text. The best of both worlds!

A clean and bold sans serif, Hammerhead Soviet Propaganda Font Family offers three different weights, each made up of over 250 glyphs. The font family is perfect for a wide range of projects.

Propaganda Graphic Design is just one of the many graphic designs dedicated to constructivism offered at Envato Elements. This A4 size design is offered in both AI and PSD files, and the text, images, and colours are all completely editable.

Converon Constructivism Typeface is a fantastic, chunky block font that can be used for a wide variety of projects. With its strong, bold look, this font will stand up well in larger projects like posters and billboards.

Want to make a flyer or poster with a constructivism style? Check out Indie Fest Propaganda Poster. This wonderful template is organised in layers to make it easy to edit in Photoshop.

This vector illustration can be edited and scaled to any size without losing quality. Use Frontman Propaganda Graphic Design for a great illustration in any project you like, and customise it to reflect your own needs.

Use the wonderful Abstract Geometric Propaganda Poster to create your very own flyers and posters. The template is all laid out for you, so that all you need to do is edit the text and colours.

Now that you know just where to find the best cursive fountain pen fonts when you need them, head to Envato Elements and download your favourites today. Here are more top design resources and tutorials to try from Envato Tuts+: